“We must stop fooling ourselves and accept the difficult task of facing evil. The documentation in our book makes clear that several hitherto unimaginable realities can no longer be avoided or denied as painful and outlandish as they are:

1.) The Covid-19 attack on America and the world was planned well in advance, at least as far back as 2015-2017. The fundamentals of what would become ‘Operation Warp Speed were put into motion before 2017 with Bill Gates working with CEPI, Pfizer, Moderna, and with corporate/government collaborations characteristic of what would become Klaus Schwab’s Great Reset.

2.) Experiments with mRNA and DNA vaccines for SARS-CoV going back at least to 2006 repeatedly demonstrated that many vaccinated animals become worse and even die, especially when then exposed to a SARS-CoV. Further studies demonstrated that the SARS-CoV-2 spike protein that the new vaccines make the human body replicate is very toxic to humans. The global predators know that they are inflicting vaccines on humanity that cause serious illness and kill many immune-compromised and older people. Consistent with a eugenic policy, the vaccines especially kill older and sicker people and also target the ovaries, almost certainly reducing fertility in many women.

3.) SARS-CoV-2 was developed through the mutual, combined efforts of American scientists and Chinese Wuhan Institute scientists with the support of Anthony Fauci’s NIAID and also NIH. Thus, Fauci helped the Chinese Communists build multiple SARS-CoV biological weapons and then lied about the origin of SARS-CoV-2 to cover his tracks and protect his communist allies. As an act of stealth ‘unrestricted warfare, the Chinese released the weapon.

4.) When the very existence of the global predators and the Chinese Communists was threatened by Donald Trump and his America First policies, the Communists almost certainly released SARS-CoV-2. Then they purposely spread it around the world on passenger flights. In this way, they managed to wreck America’s economic and social life – and to stop President Trump from having a second term. They also achieved the collateral gain of reducing one of their greatest social and economic burdens – their disproportionately large elder population.

5.) With draconian policies and fear tactics, the global predators succeeded in putting America into its current condition of moral and political docility and apathy. The main characteristic of America’s tragic condition is the lack of outrage at censorship of the President and now of anyone who threatens the current evolving one-party system and its global predators.

6.) Most of the world’s great institutions have been infiltrated or taken over by globalists, many with progressive or Chinese Communist agendas, and all of them trying to exploit humanity. Their globalist agendas now control the Democratic Party, most big corporations, universities, the medical and scientific establishments, entertainment, and even sports franchises and leagues. In America, hardly any aspect of our cultural, social, and economic life is free of control by the globalist, predatory elites.” 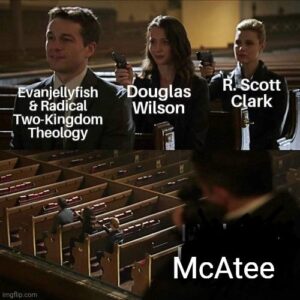 Scott Clark of Westminster Seminary California recently tweeted a link to an older piece of his which contains the following section:

“Through the history of the church there have been two great errors on this question. One is to identify the common realm with the kingdom of God. This was the great error of Constantinianism, in which the civil magistrate was made more than a minister of God (Rom 13:4) authorized to use the sword for the preservation of this-worldly civil peace but in which he was considered to be God’s minister for the advancement of the gospel. There is no evidence in New Testament for such a notion. The advance of the gospel is considered to be a purely spiritual and ecclesiastical matter.” Heidelblog, August 2, 2016

Some observations on 2 highlighted quotes:

1. “…in which he was considered to be God’s minister for the advancement of the gospel. There is no evidence in New Testament for such a notion.”

First of all, note the recurring latent Marcionite hermeneutic used by the R2k sect, which invariably appeals to the New Testament without bringing the Old Testament into view. The O.T. is replete with examples of the magistrate charged with working to advance the Kingdom.

Second, note Clark makes his New Testament appeal with an “argument from silence”, which is fallacious reasoning. By this hermeneutic, one could argue for legalizing bestiality since the New Testament is silent on it. Recall that one R2k WSCAL grad already has made a similar argument.

Rather, Reformed Christians see all of Scripture as useful for instruction and correction, even in the arena of civics/public ethics. The God of the Old Testament is the God of the New Testament.

2. “The advance of the gospel is considered to be a purely spiritual and ecclesiastical matter.”
This recurrent feature of the R2k sectarians is to ignore Belgic Confession Article 36 which states that the magistrate is charged with “removing every obstacle to the preaching of the gospel and to every divine aspect of worship” and does so “in order that the Word of God may have free course, the kingdom of Christ may make progress, and every anti-Christian power may be resisted.” It should be clear that the magistrate, in its designated sphere, has a coordinate protective role around the church, so that through the preaching of the gospel the Kingdom of Christ may advance. The means employed by the church and the magistrate are different, but the God-honoring goal is the same. This should not be hard to see.

The R2k folks have a choice: either write an overture to amend/delete Belgic 36 or submit themselves to the Reformed confession they subscribed to uphold. If they choose neither of these options and continue on their present deconstruction project to segregate Christian principles from the civil realm, then the churches have a choice to make.

There is a third option that Van Der Molen failed to mention. The R2K boys could try and pass what is called a “gravamen.” This would be the attempt to write in a permanent exception to the Belgic Confession of Faith — Article 36.

“Many people who become very rich, full of themselves, and powerful are, or rapidly become, morally defective, and remote from anything like empathy or fellow feelings for ‘humanity.’ They simply do not consider the suffering their grandiose plans will inflict on others. This, of course, is characteristic of global predators and, to some extent, all predators — failure to feel concerned for their prey. It is probably impossible to exploit people without crushing your capacity for empathy and caring.”

This quote reinforces what I have long said about the Globalists who I call “Lizard people.” They are not like normal people living in the context of Christian categories of thought and behavior.

I have noticed the truth of this quote throughout the years in the ministry with individuals but this is especially true in our whole social order since we are a culture that enshrines manipulation and exploitation. From dodgy salesman of all stripes to ministers who build their “ministry” in order to advance their personal well-being to politicians who only exist by selling themselves like soap thus manipulating and exploiting people into purchasing a product (their election to the office) that is not really in the electors best interests American culture is one grand adventure in manipulating and exploiting. It is ubiquitous. The more someone goes down the manipulation and/or exploitation of others path the more they become non-human as seen in their general lack of compassion, sympathy, empathy, and potential to experience shame or guilt. Living the manipulative and/or the exploitive life is a sure way to harden your soul against any divine commands.

The Lizard People who are the cultural gatekeepers don’t care about people. They care about pleasing and advancing themselves and they will use all means to do just that. They will flood the homogeneous nation with the alien and the stranger just so they can advance and enrich themselves and then will cynically argue the necessity of compassion quite dismissing the question of how much compassion is involved in disinheriting one’s children and grandchildren. The Lizard people are themselves cosmopolitans and have no attachment to a people or place and so the third-worldizing of the West is thought of only in terms of how much it will increase their bottom line of profit.

Sad to say as a minister of the Gospel this Lizard People phenomenon is true in spades in the modern “Conservative Reformed Churches” in America and the West. Odds are your pastor is a Lizard person of one degree or another. They don’t really care about the flock — they are the hirelings Jesus warned about. If they cared about the flock they wouldn’t be repackaging cultural Marxism and then telling you that that repackaged cultural Marxism is really Christianity. They wouldn’t be announcing in Church this grand program to help relocate refugees and illegal immigrants from around the world thus also announcing (though this is never said) that they are aiding in the process of disinheriting and replacing the children of their WASP congregants. They wouldn’t be telling you from Reformed pulpits all across the land that “the Church is silent on moral issues in the broader culture because it would compromise the Church’s mission if it held up God’s moral standard as the canon that measures all behavior.” Their primary passion would not be to climb the Deep Church “Evangelical” ladder of success if their primary passion was tending the flock of Jesus Christ.

As the quote notes above our clergy as well as the other cultural gatekeepers, exceptions notwithstanding, are morally defective, and if they are doing all this and are not morally defective then they are stupid and on that basis also people have no business listening to a ruddy thing they say.

“For when any institution of human character or composition trespasses or exceeds the limits of God-given authority, then we are not under obligation to obey. (The violation of a law humanly imposed, and not the legitimate exercise of God-given authority, does not involve sin.) Nothing is sin except that which involves the violation of a divine obligation. There is only one Lawgiver. If the ordinances of men require us to violate the law of God, then we must obey God rather than men and must violate the human ordinance. If human ordinances do not require us to sin but are in excess of divinely authorized prerogative, then compliance is to be determined by expediency in relation to all the circumstances of the situation.”

MY orders are to fight; Then if I bleed, or fail, Or strongly win, what matters it? God only doth prevail. The servant craveth naught, Except to serve with might. I was not told to win or lose, – My orders are to fight. ~ Ethelwyn Wetherald

This website is a service to God's Kingdom people. If you would like the opportunity to tithe or give to this ministry I would be glad to be yoked to your support. If you cannot give, I am glad that you can profit from what is written here.


If you enjoy what is written here, please check out my podcasting site.

Get Iron Ink by Email